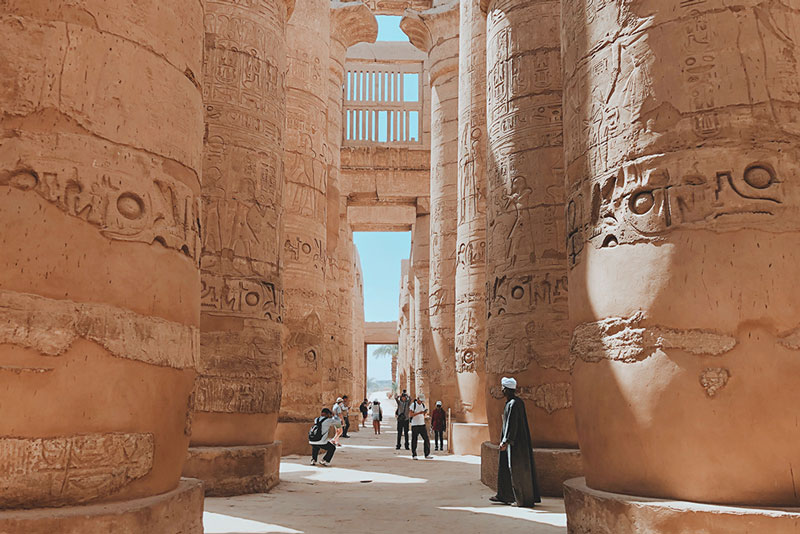 Egypt’s reputation as a travel destination has taken some hits with travelers and travel professionals over the last several years, making some people wonder: Is it safe to travel to Egypt in 2022?

“Yes, it is safe; it is very safe,” says Egyptian-born Tewfik Ghattas, board member and Egypt expert for New Jersey-based Central Holidays.

“You must understand that this is a country that had a revolution, and had some instability, and had an image that scared tourists,” Ghattas continues, “but it is much better and safer for tourists than it has been since the revolution, and for many years previous to that.”

Travel experts concur; as travel writer Ian Livingston put it: “You should keep your wits about you, as anywhere … But let there be no doubt: Egypt … is again warmly welcoming and rewarding travelers.”

The State Department has given Egypt a level-3 (reconsider travel) rating for COVID and its inability to assist people with American and Egyptian dual citizenship should they be detained. 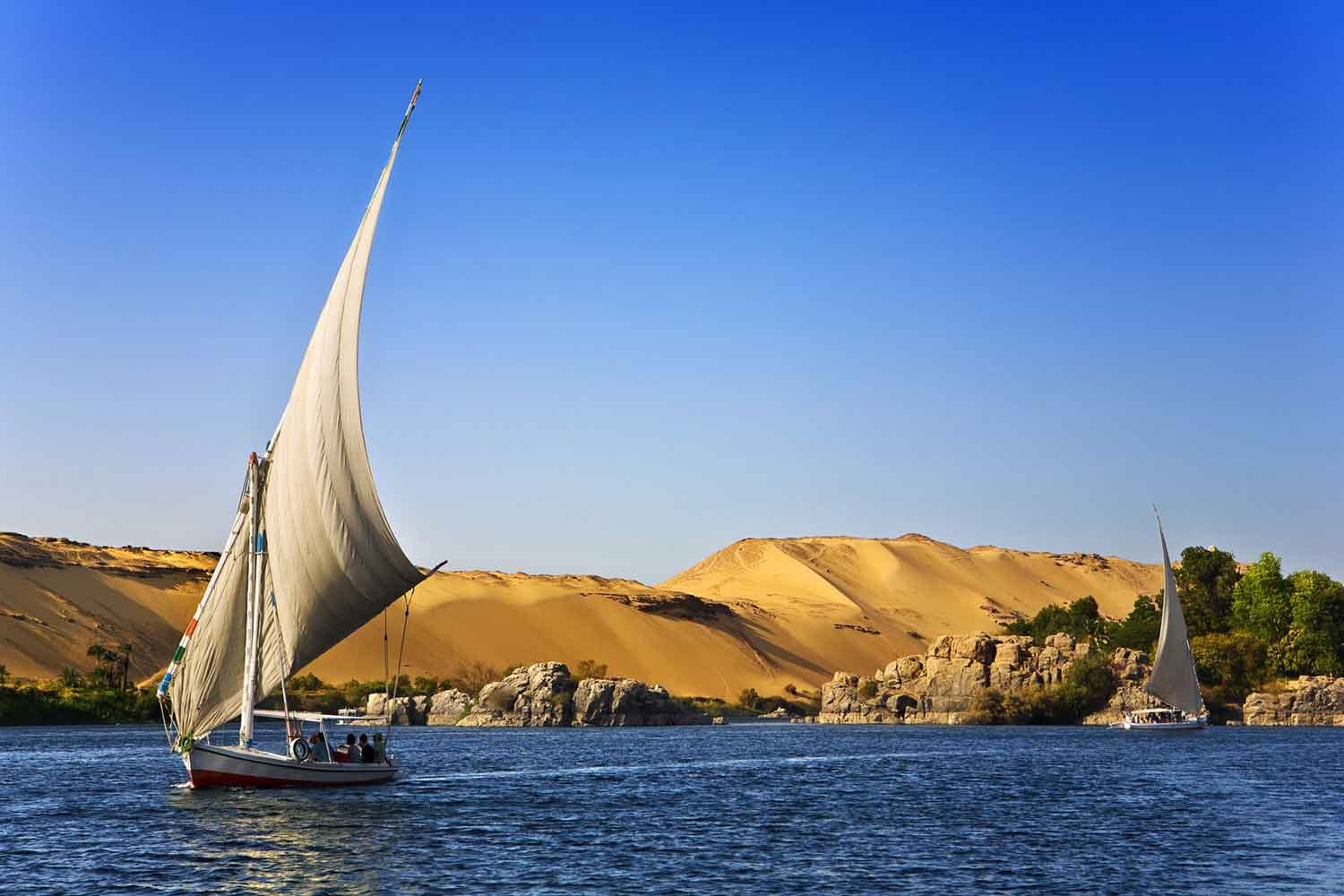 Here are some of our tips for making your Egyptian vacation safe and memorable:

1.  GO WITH SOMEONE WHO KNOWS EGYPT

“You may only go to Egypt once in your life – you owe it to yourself to see it with someone who really understands it, who speaks English well enough to explain it to you, and who loves it as much as I do,” Ghattas says.

If that seems costly, he explains that seeing it right means you may not need to come back and see it again – though he certainly encourages you to.

2.  LISTEN TO THE STATE DEPARTMENT

The State Department has rated Egypt as a level-three (exercise increased caution) country, because of a combination of factors, including COVID-19 and terrorist threats.

There is a do-not-travel recommendation for the Sinai Peninsula (except for the resort city of Sharm El-Sheikh), the Western Desert, and most border areas.

Egypt’s status did not change after a December 2018 bus attack in Giza that killed three Asian tourists; instead, the rating and the incident reinforce the reality that infrequent attacks on tourists occur, though the chances are small of a tourist becoming a victim. 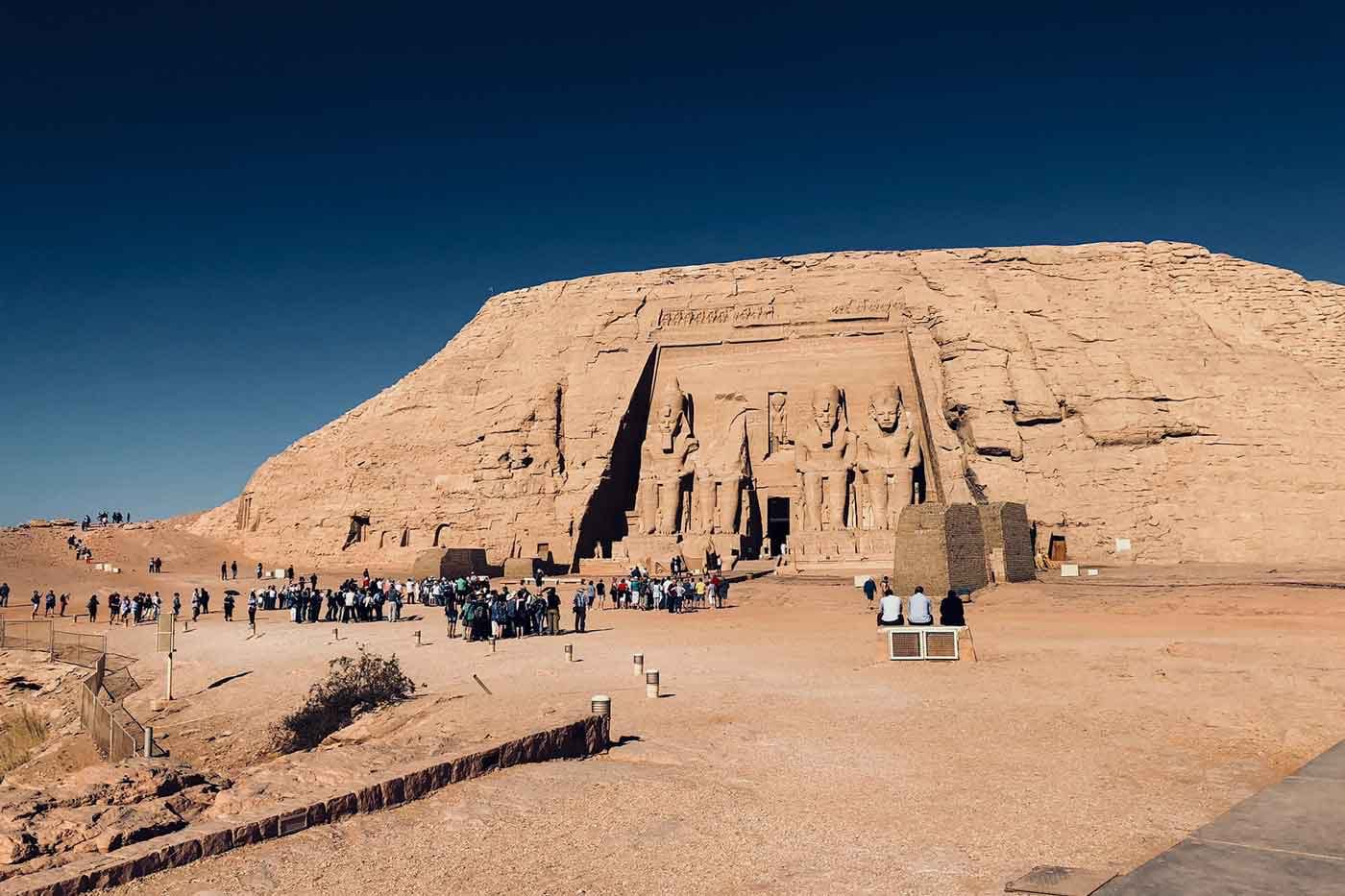 One reason why Ghattas recommends seeing Egypt with a reputable tour operator is that admissions to major attractions like the Pyramids, Luxor, and Abu Simbel can be squared away before arriving at the destination.

By pre-purchasing or going with a tour, you know what you’re going to see before you arrive at your destination.

One of the perks of taking a Nile cruise is that admissions to these attractions are often included as part of the price (making cruise insurance important for these trips).

4.  WATCH FOR PICKPOCKETS AND PURSE-SNATCHERS IN BIG CITIES

Egypt is nearly crime-free; as Lonely Planet notes, “The incidence of crime, violent or otherwise, in Egypt is negligible compared with many Western countries, and you’re generally safe walking around day or night.”

Most crime is petty theft, with little violent crime. Still, you need to keep alert when walking through densely populated areas of Cairo or Alexandria, just as you would in other large urban areas around the world.

“You can tell when a country has become safe and stable when daily flights resume,” Ghattas says. “There are now flights from the U.S. to Cairo on all European, American, and African airlines. Egypt Air also has connections to all in-country destinations like Luxor, Alexandria, and Sharm el-Sheikh – but they are all full.”

As a result, Ghattas says that they are putting people on waiting lists. If you want to visit Egypt this year, a tour operator will have the largest selection of times and flight availabilities; otherwise, you’ll need to be flexible and/or creative – booking a flight to Europe and trying to get to Egypt via Europe, for instance. 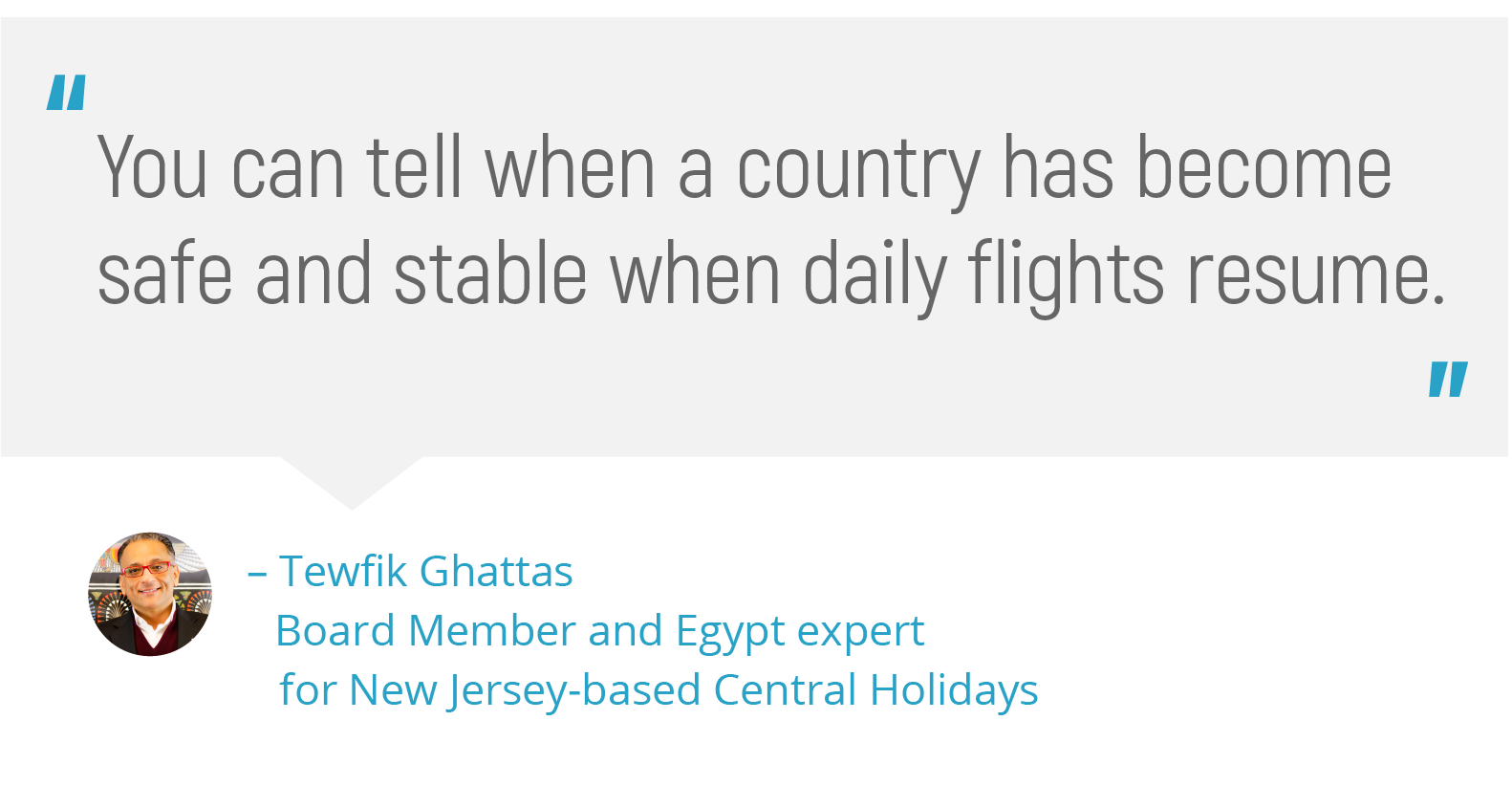 Ghattas recommends that if you want to visit Egypt in the coming year, a tour operator will have the largest selection of times and flight availabilities; otherwise, you’ll need to be flexible and/or creative – booking a flight to Europe and trying to get to Egypt via Europe, for instance.

Because of potential difficulties finding flights, travelers are encouraged to investigate purchasing flight protection (like that offered by Berkshire Hathaway Travel Protection) that can cover delays, cancellations, missed connections, and other flight mishaps. 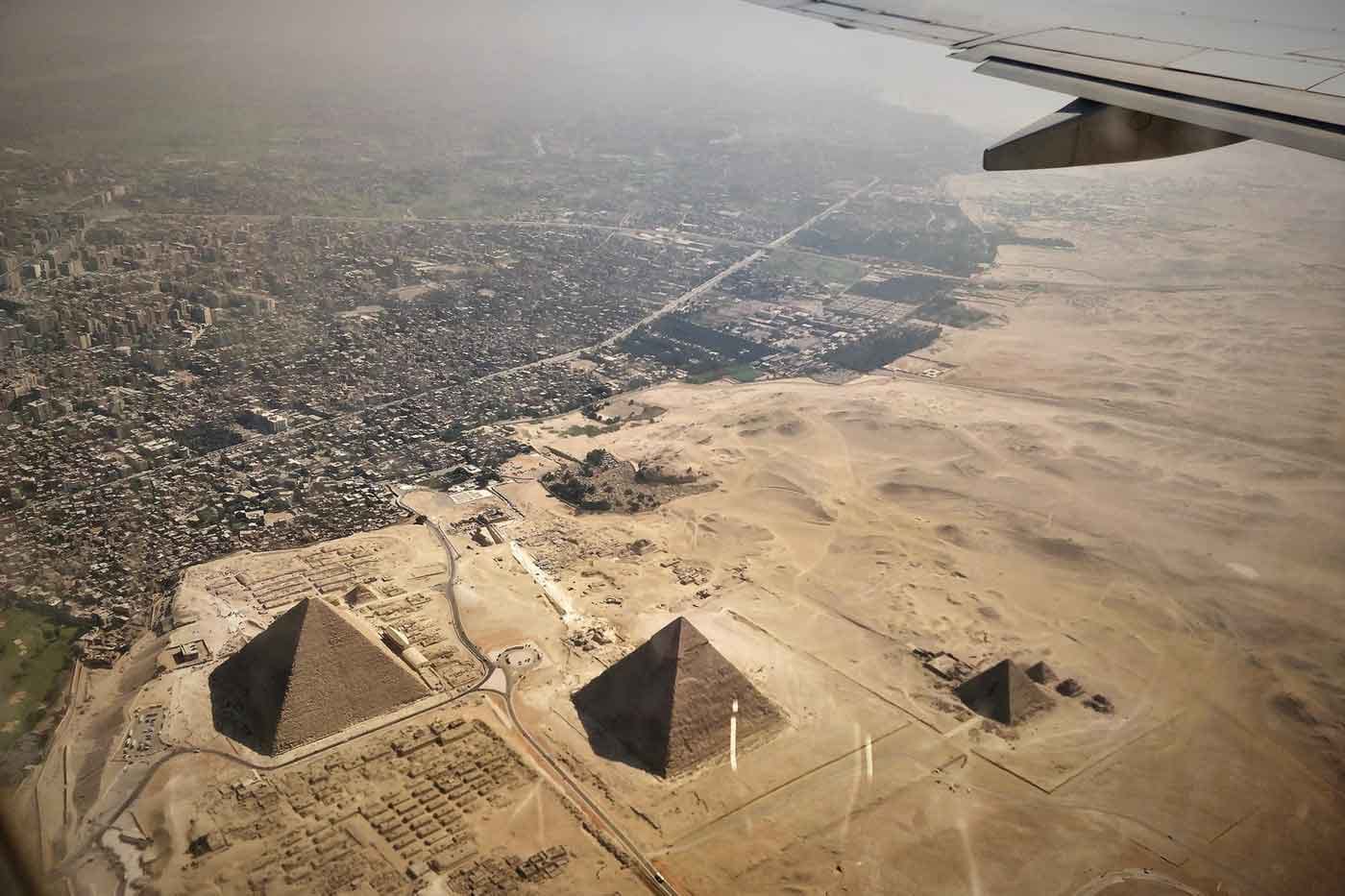 6.  BE PREPARED FOR CRAZY AIRPORTS

A major safety step occurred in 2017 when the Egyptian government began inspecting airports and certifying them as safe. That step encouraged airlines to resume regular service to Egypt, according to Ghattas, and helped spur tourism.

However, air travel in Egypt can have some rough edges. According to the State Department, there can be unruly crowds outside terminals at Cairo International Airport. In addition, unauthorized chauffeurs and “set fare” taxis are common.

Best bet: Take a tour, where all of this is taken care of for you.

Next best bet: Have your hotel arrange transportation from the airport to your hotel. If that’s not possible, take an Uber.

You can buy your visa right at the airport. Stick it in your passport as soon as you get it to avoid getting kicked to the back of the customs-and-immigration line. 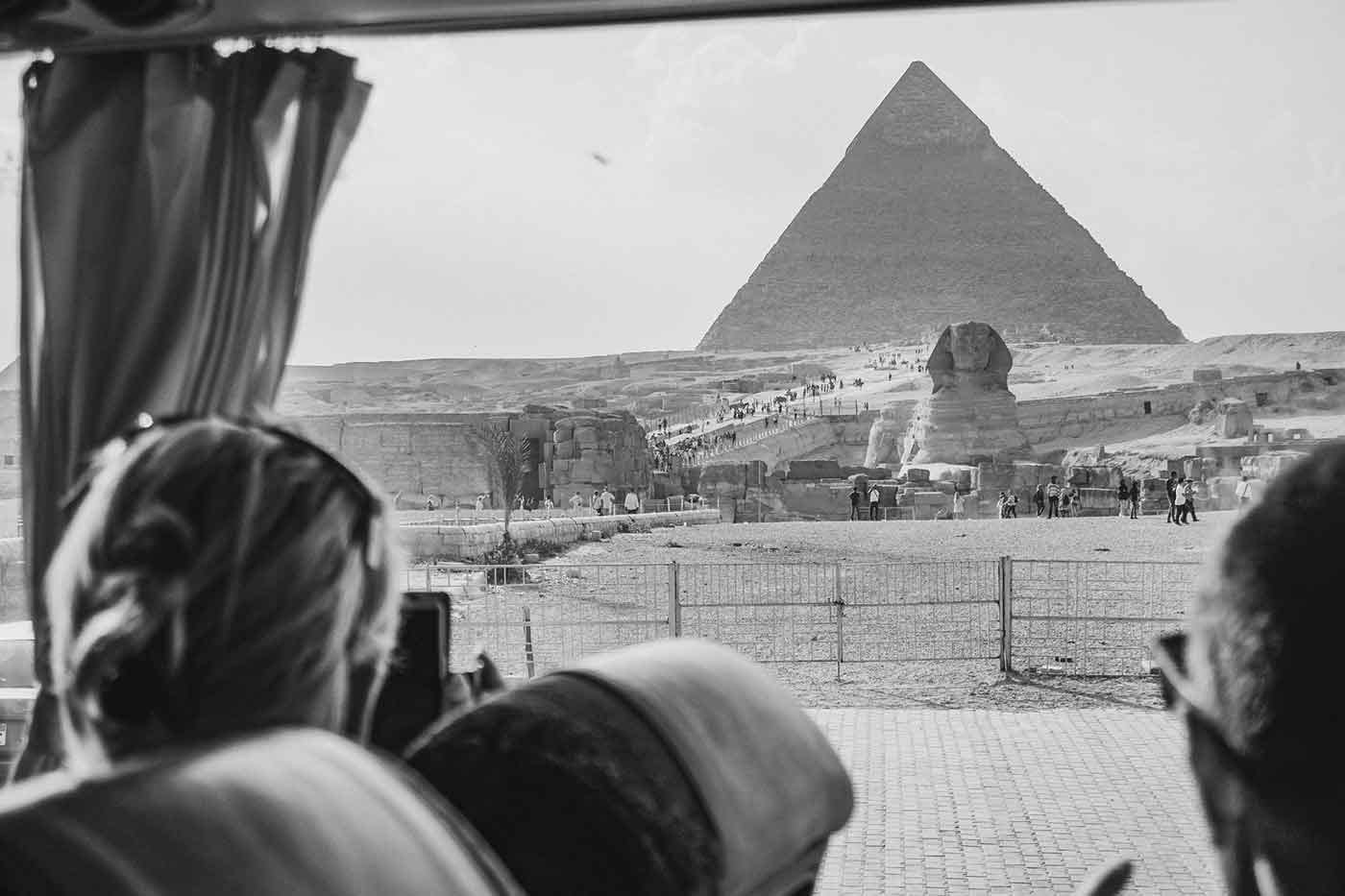 Here’s another reason why you might want to stick to tour buses: Driving around Cairo is insane. A 30-minute trip might take three hours, and when traffic does move, it moves – at a frantic, lawless pace.

The best description of Egyptian traffic comes from the U.S. State Department, which does not usually expound at length about traffic safety. It notes that:

There are few alternatives to driving around Cairo outside of the metro, which is specifically not recommended by the State Department.

Your best choices outside of the tour bus: fly when you can and if you must drive, hire an experienced local through your hotel.

According to the State Department, foreigners can occasionally be taken for a ride (so to speak) by Egyptian taxi drivers who claim their meter is broken. Know the going rate for a taxi ride before you get in a cab, and hold firm on your price.

Female solo travelers should not talk with taxi drivers other to exchange basic pleasantries, and women should always sit in the back seat of a taxi. 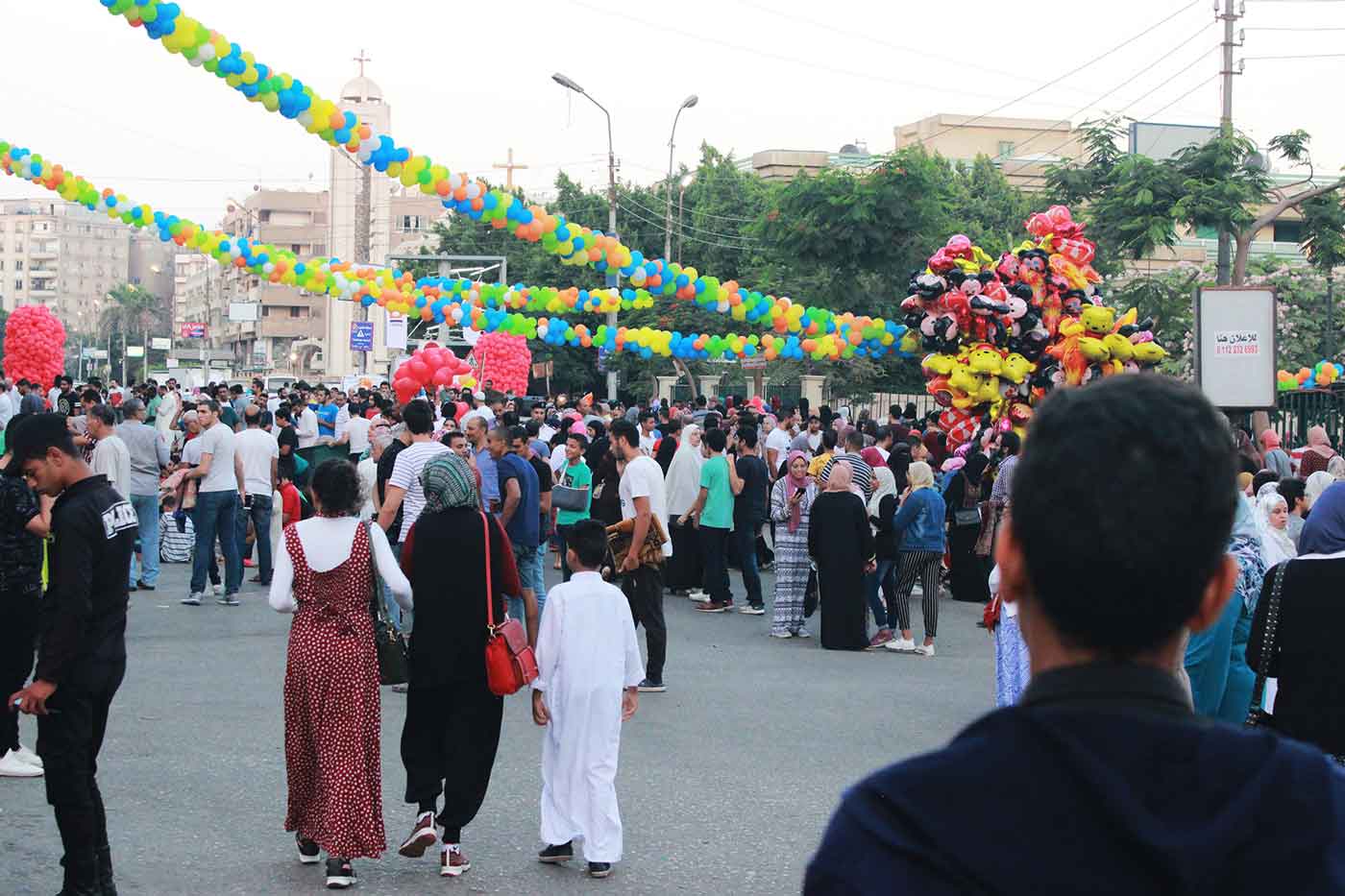 People take to the streets in Egypt, and sometimes peaceful protests can turn violent. Bystanders can get caught up in the mass arrests that can follow violent protests.

There are more impressive – and safer – things to see in Egypt than protests. All things considered, move along.

11.  ENJOY THE SAHARA, BUT BE CAREFUL

The Egyptian Sahara occupies more than half the country, but it’s not just one huge sea of sand. There’s the Western Desert (which contains the White and Black Deserts), the Eastern Desert, the Great Sand Sea, and the Sinai Desert – all beautiful in their own ways.

The Sahara is vast and spectacular, but it can also be dangerous for an inexperienced traveler. If you plan on doing more than just dipping your toe in the sand, take a tour or hire an experienced guide. 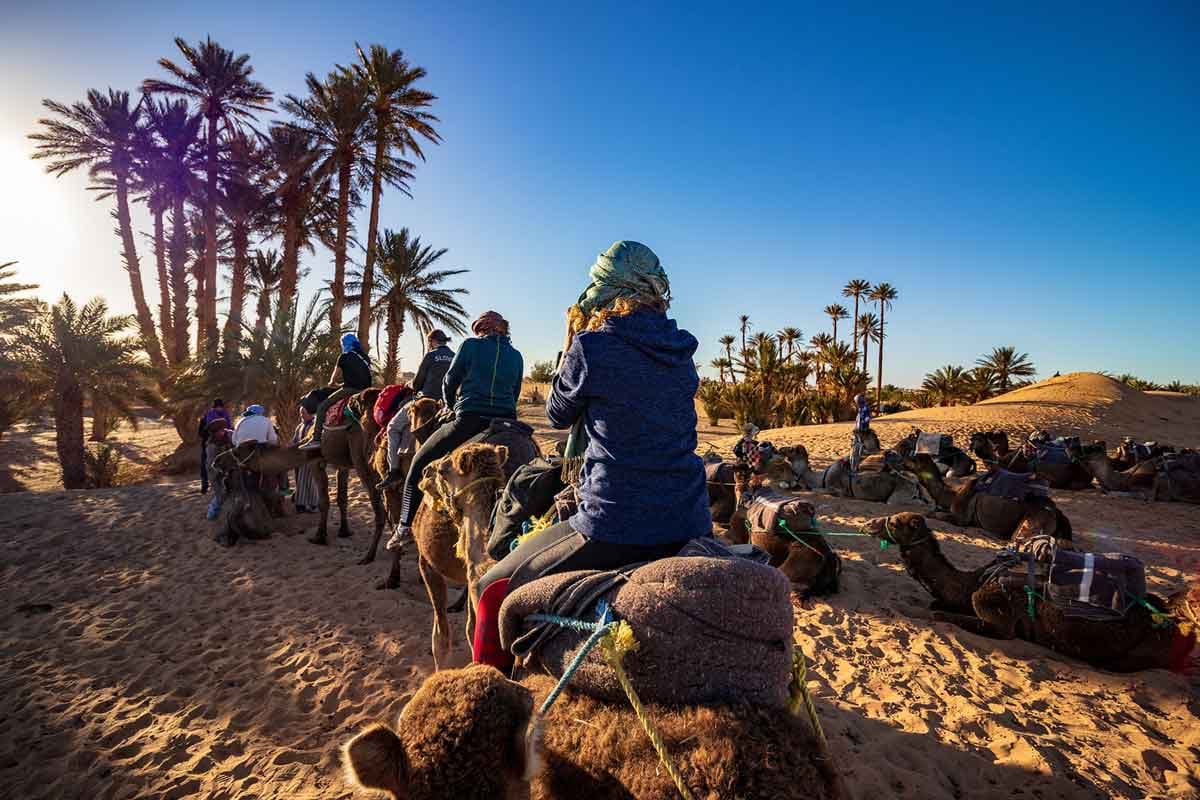 Egypt is a Muslim country. As a result, the British government advises travelers, “Dress modestly, especially in rural areas, mosques and souqs (markets). Women’s clothes should cover the legs and upper arms. Men should cover their chests. Public displays of affection are frowned upon.” 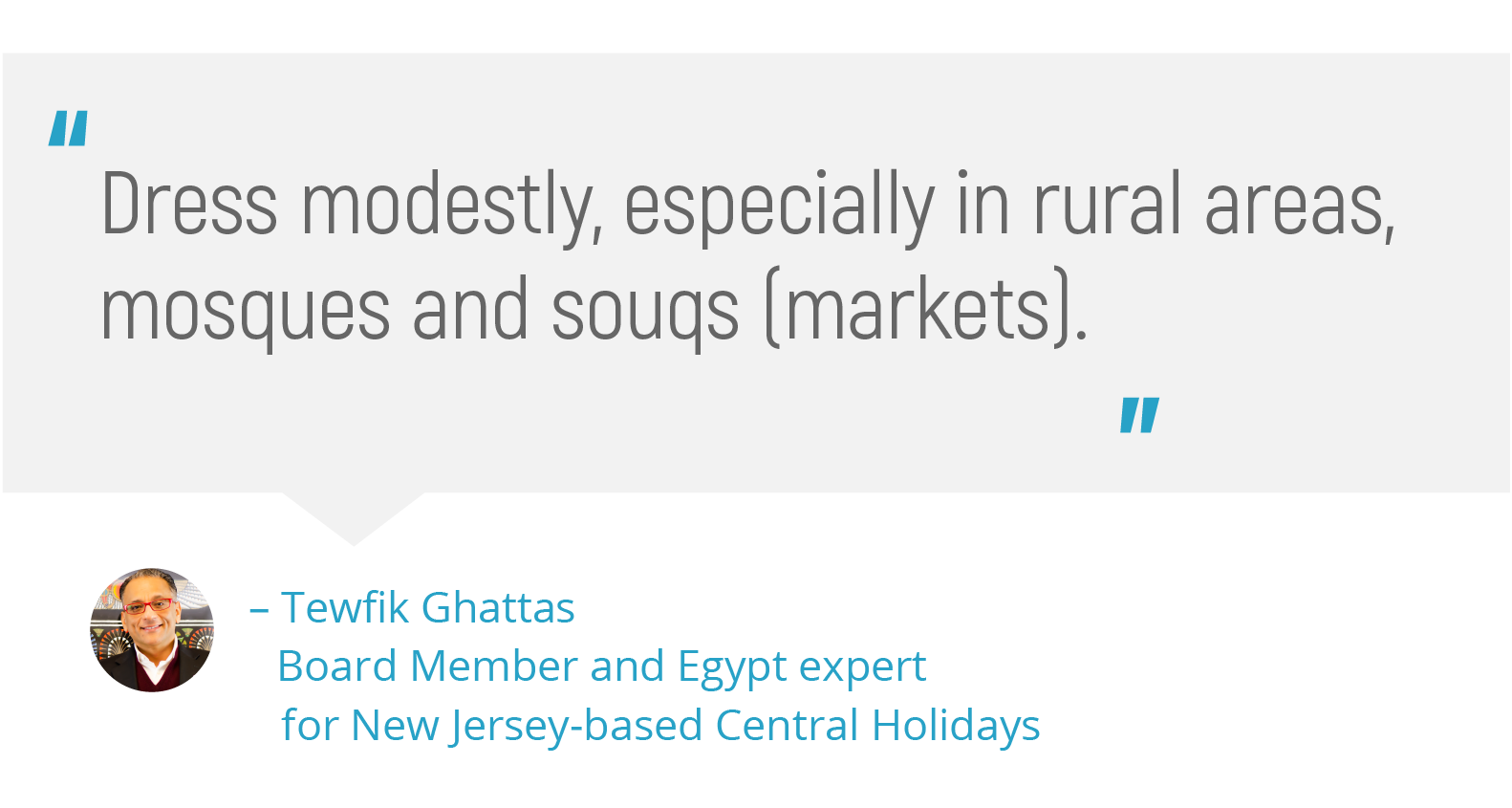 Also, alcohol consumption is banned outside of licensed bars and restaurants.

If you follow these simple tips, your trip to Egypt will be the trip of a lifetime.

“Egypt is not for Egyptians only; it is for humanity,” Ghattas concludes. “When you will be in front of Abu Simbel, or the Pyramids, or the temple in Luxor, you will see things you cannot describe in words. Only with your heart will you feel all of these things. And it will be a permanent memory.”

Enjoy your Egyptian vacation, and if you have questions on how travel insurance can help protect you when you travel to Egypt, consult our handy guide here.